Ennerdale is the most westerly of the major lakes in the Lake District, making access from the main Lake District villages somewhat difficult.  There is no major village in the valley, and the access road only reaches the lake, so it is a long walk around the lake to the head of the valley.  This all combines to mean that Ennerdale is the quietest of the major Lake District valleys.  The valley was extensively planted with conifers during the 1920’s, but more recently the trend has been towards regeneration – planting native species of trees and allowing the valley to develop naturally. The valley is ringed by some of the Lake District’s most impressive mountains, Pillar and Steeple on the south side of the valley and the High Stile range to the north, however due to the long access routes, these are seldom climbed from Ennerdale.

There is a 6.5 mile walk around the lake, which can be started from either car park however our pictures were taken from the foot of the lake or from a walk up Crag Fell, the prominent fell on the right side of the lake.  For the walk up Crag Fell, park at the Ennerdale Water car park and instead of walking to the lake, head south towards Crag Farm House, then turn right along a track bordering the forest.  When the corner of the field wall on the right is reached, there is a small track left into the forest – this is easy to miss, but once on the track it is easy to follow uphill, until the open fell is reached. 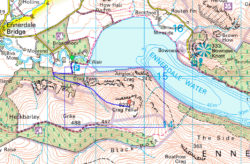 Ennerdale is accessible from the A595 on the West coast of Cumbria and is signposted from this road.  There are two car parks, Ennerdale Water car park at the head of the lake, and Bowness Knott car park on the northern shore.  To reach both car parks, drive through the village of Ennerdale Bridge then for the first car park, turn right after 0.5 miles and continue to the end of the road.  For the Bowness Knott car park, keep straight on at the junction for a further 0.8 miles before turning right, and the car park is 2 miles along this road.

Posted in Cumbria and tagged Lake.